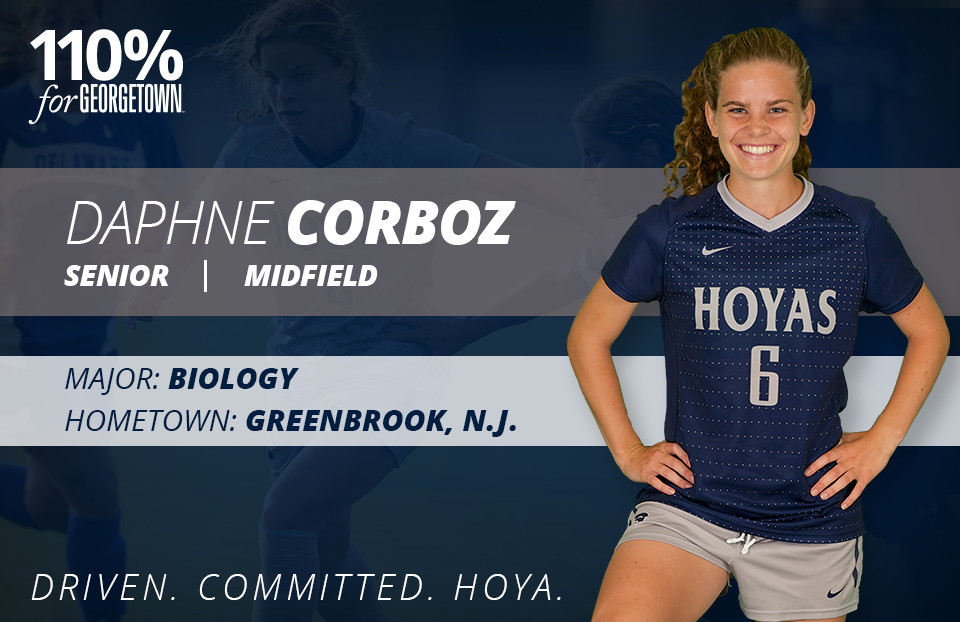 Daphne Corboz is a two-time All-American and was named the BIG EAST Midfielder of the Year in 2013, leading the team with 27 points. Corboz, who was also a unanimous All-BIG EAST First Team selection and a preseason candidate for the Hermann Trophy, scored seven goals and had 13 assists. She missed the first five games of the season with an injury, but was among the most dominating players in the BIG EAST upon her return.

Corboz was named the BIG EAST Offensive Player of the Year in 2012 and was a First Team All-American in 2012. In just three years on the Hilltop, Corboz is the all-time leader in goals scored (35) and ranks second all-time in points scored (92).

What is your most memorable moment in your playing career at Georgetown?
“My most memorable moment in my playing career at Georgetown is the 2012 BIG EAST Championships. We had lost the previous year in the semifinals. This time, we scored at the very end of the game to tie and we won in penalty kicks. Playing in a BIG EAST Final for the first time was a big step for our program. Unfortunately, we lost in the final at the last minute, but I still have very fond memories of that 2012 season.”

Do you do any volunteer work in the community?
“I am a program coordinator for the Georgetown division of The Grassroot Project. The program consists of student-athletes traveling to inner city D.C. schools to teach the youth about HIV/AIDS.”

What would you like to say to a donor to The Annual Fund for Georgetown Athletics?
“Thank you so much for donating to Georgetown Athletics. We all really appreciate your support. Your help has allowed me to have a great, enriching experience as a student-athlete at Georgetown University.”

My favorite thing about Coach Nolan: His belief in technical players

My favorite class at Georgetown has been: Genetics

My hardest class at Georgetown has been: Biochemistry

My favorite tourist activity to do in Washington DC is: Run to the monuments

The best thing about being a Hoya Soccer student-athlete is: My teammates

If I could vacation anywhere in the world, I would go to: Africa

My favorite place to eat in Georgetown is: Paul’s