In the Huddle with Nic Mahaney 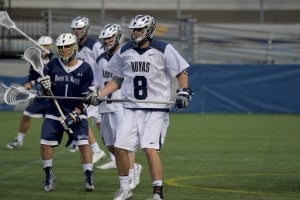 Named a team captain for the 2016, Nic has played in over 40 games as a Hoya, starting six at close defense during his junior season. Nic finished the 2015 season with seven ground balls and two caused turnovers, including a career-high three ground balls in a win over Hobart. Off the field, Nic has been named to the BIG EAST All-Academic Team for the past two years. Let’s go In the Huddle with Nic! Continue reading →

In the Huddle with Dorothy Adomako

Dorothy Adomako earned All-BIG EAST Second Team honors in the 2015-16 season after being named Freshman of the Year last season as well being selected to the All-Rookie Team and Honorable Mention All-BIG EAST. She ranks second on the Hoyas with 14.4 ppg and leads the team with 6.3 rpg as the Hoyas head to the BIG EAST Tournament. Let’s go In the Huddle with Dorothy! Continue reading →