In the Huddle with Alec May 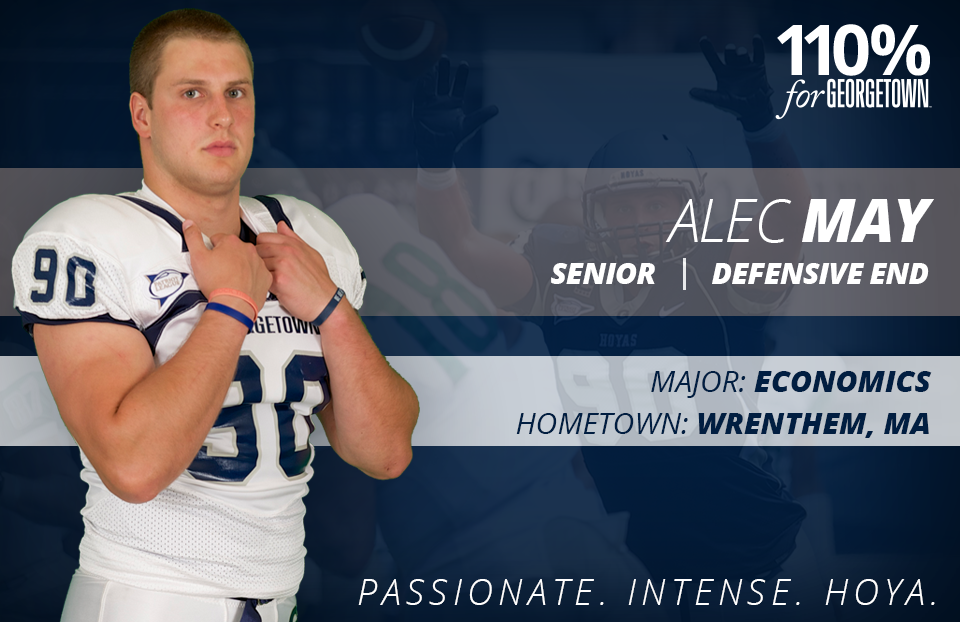 Senior defensive end Alec May was named the College Football Performance Awards (CFPA) FCS National Defensive Lineman of the Week on Tuesday, September 23 when weekly awards were announced. The honor follow the Georgetown University football team’s 17-3 victory over Brown University on Saturday, September 20. It was the Hoyas first victory against the Bears in program history and its first home victory over an Ivy League opponent.

What is your most memorable moment in your playing career at Georgetown?
“My most memorable moment playing at Georgetown was after we beat Holy Cross my freshman year. It was a close game, and the victory meant that our matchup versus Lehigh the next week was for the Patriot League title. Celebrating with my teammates and coaches afterwards and the sense of accomplishment was something that I will always remember.”

How do you give 110% for Georgetown?
“I am involved with my team with Friends of Jaclyn, an organization that pairs up college sports teams with children who have had a serious illness. We adopted Jackson and Elijah and have built relationships with them while including them in team activities.”

Hoya Facts with Alec May:

The favorite thing about Coach Sgarlata is: He always has my back

My favorite places to eat in Georgetown are: Old Glory and Thunderburger

My favorite class at Georgetown has been: Sociology of Terrorism

My favorite tourist activity to do in Washington, DC is: Visit the Smithsonian Museums

The best thing about being a Hoya Football student-athlete is: The friendships and connections I have made

My greatest strength as a football player is: My effort

My hardest class at Georgetown has been: Econometrics

My best sport other than football is: Volleyball

My most cherished possession is: A photo of my grandpa and myself

The team I look forward to playing most is: Holy Cross